Economy June 09, 2021 18:38 0 World Bank Revises Up Iran’s Growth Estimates, Forecasts . . . . . The World Bank has revised up its estimates and forecasts for Iran’s economic growth in its latest Global Economic Prospects reports published in June.According to the report, the economy is forecast to experience 2.1% and 2.2% 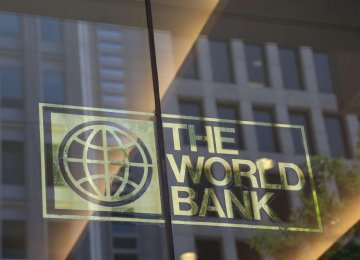 The World Bank has revised up its estimates and forecasts for Iran’s economic growth in its latest Global Economic Prospects reports published in June.
According to the report, the economy is forecast to experience 2.1% and 2.2% growth in 2021 and 2022 respectively.
New forecasts have been revised up by 0.6 and 0.5 percentage points respectively.
This is while forecast for 2023 GDP growth is at 2.3% in the new report.
The estimate for 2020 has been revised up to 1.7% from -3.7% in the previous report published in January.
According to the World Bank, Iran’s economy saw 6% and 6.8% contraction in 2018 and 2019 respectively.
The report’s quarterly estimates put the respective 2019 Q4, 2020 Q1, Q2, Q3 and Q4 growth rates at 1.8%, -6.8%, -2.9%, 4.9% and 3.4%.
“Despite continued pandemic-related disruptions, rising oil prices and faster-than-expected recoveries in most regional economies are supporting activity to 2.1% in 2021 and 2.2% in 2022 with a rebound in industrial production outweighing continued suppressed demand for services due to a high number of Covid-19 cases,” it said.
The new revised up forecasts and estimates come as indirect US-Iran talks on reviving the deal are due to resume in Vienna, Austria, this week.
The talks seek to revive a landmark pact under which Iran agreed to curbs on its nuclear program in return for the lifting of international sanctions, which opened the way for a brief thaw in decades of US-Iranian confrontation, according to Reuters.
Then-president, Donald Trump, abandoned the deal in 2018 and reimposed sanctions.
Trump's successor Joe Biden has said he wants to restore the deal's nuclear limits and if possible extend them to cover issues such as Iran's missile program. Iran wants all sanctions lifted and no expansion of the terms.
European Union envoy Enrique Mora, the chief coordinator of the talks, said last week he believed a deal would be reached at the upcoming sixth round of negotiations in Vienna, expected to resume on Thursday or Friday.
Adding to the impetus to make progress is an election in Iran on June 18 to replace President Hassan Rouhani, a pragmatist who promoted the original deal.
The election is not likely to change Tehran's negotiating stance.
Iran's top nuclear negotiator said last week that barriers to a revival of the deal are complicated but not insurmountable.
Abbas Araqchi added that differences have reached a point where everyone believes these differences are not insolvable.
However, none of the remaining sticking points lends themselves to rapid solutions, according to the diplomat, Iranian officials and analysts of Iranian nuclear matters.
The negotiations have made considerable progress but are now at the hardest part with the key decisions still needed, said a European diplomat briefed on the talks, which began in April.
The talks have arrived at "the heart of the matter on the nuclear dimension", a second European diplomat said.
A senior Western diplomat said that “of course” he hoped that the next round would result in a deal, but injected a note of caution, saying “until we are able to resolve the important issues that remain, we won’t know”.
An Iranian official said: "Everything depends on Washington. If the American side accepts to lift all sanctions, then Iran will return to full compliance with the deal."
In addition to seeking the lifting of Trump-era sanctions, Tehran also wants Washington to remove Iran's Revolutionary Guards from a terrorism blacklist, which can be used to bar Iranian businesses from the international financial system. It wants Europe to guarantee foreign investors will return and assurances that Washington will not renege on the deal again.
Iran’s policy toward the nuclear deal and negotiations with world powers over how to restore it will continue after President Hassan Rouhani leaves office and regardless of who takes over government, a top official said.
Ali Rabiei, Iran’s government spokesman, said because the policy of engaging with other participants in the 2015 accord, including the US, was made by Leader of the Islamic Revolution Ayatollah Seyyed Ali Khamenei and has the backing of the highest levels of the establishment, it won’t change when the Rouhani administration leaves power.
Iranians are scheduled to go to the polls on June 18.

The International Monetary Fund expects Iran’s economy to grow by 2.5% in 2021.
In its World Economic Outlook report titled “Managing Divergent Recoveries”, IMF has put Iran’s GDP growth in 2020 at 1.5% and projects 2.1% in 2022.
According to IMF, the country experienced 13.4% growth in 2016, the year Iran’s nuclear deal with world powers, otherwise known as Joint Comprehensive Plan of Action, was implemented and international sanctions against the Islamic Republic were lifted.
The massive growth was followed by a further 3.8% in 2017. But with the walkout of the US from JCPOA under the administration of Donald Trump and introduction of new rounds of sanctions, the Iranian economy shrank by 6% and 6.8% in the following two years.
In its preface, the report refers to implications of Covid-19 for the world economy and says: “We are now projecting a stronger recovery in 2021 and 2022 for the global economy compared to our previous forecast, with growth projected to be 6% in 2021 and 4.4% in 2022. Nonetheless, the outlook presents daunting challenges related to divergences in the speed of recovery both across and within countries and the potential for persistent economic damage from the crisis.
“The divergent recovery paths are likely to create significantly wider gaps in living standards between developing countries and others, compared to pre-pandemic expectations. Cumulative per capita income losses over 2020–22, compared to pre-pandemic projections, are equivalent to 20% of 2019 per capita GDP in emerging markets and developing economies (excluding China), while in advanced economies, the losses are expected to be relatively smaller, at 11%.
“This has reversed gains in poverty reduction, with an additional 95 million people expected to have entered the ranks of the extreme poor in 2020 and 80 million more undernourished than before.”
Besides the pandemic, Iran’s economy has been grappling with the US “maximum” pressure campaign under the Trump administration. The new government led by Joe Biden is looking to revive JCPOA.