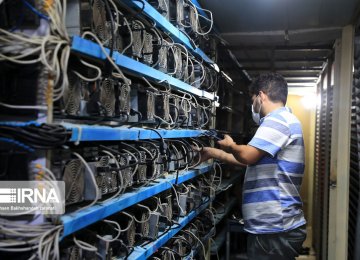 Illegal cryptomining centers shut by the Iran Power Generation, Distribution and Transmission Company (Tavanir) used 3.84 trillion rials ($16.5 million) in subsidized electricity and inflicted 380 billion rials ($1.3 million) in damages to the national grid.
Speaking at a press conference on Sunday, Mostafa Rajabi Mashhadi, Tavanir's spokesman, said the illegal miners' power consumption amounted to 703 million kilowatt-hours, which was equal to the country's total daily consumption.
Cryptominers have been blamed for the chronic power shortages in recent months that have fueled frustration across the board despite the fact that the share of legal miners in the total electricity consumption is meager.
As the power situation worsened this summer, Tavanir started shutting illegal cryptomining units to prevent shortages and safeguard the power infrastructure. It shut nearly 5,800 illegal mining farms and seized 221,825 pieces of hardware.
"By shutting unauthorized mining farms, we managed to reduce the pressure on the national grid by 620 megawatts," he said.
According to the official, Tehran Province accounted for the largest number of unauthorized mining centers, followed by Razavi Khorasan, East Azarbaijan provinces and some southern regions where the electricity rates are lower due to the hot climate.
Rajabi Mashhadi appreciated the role of whistleblowers in identifying the illegal cryptominers and said 32 billion rials ($111,500) has been paid so far as reward to whistleblowers.
Tavanir has announced rewards of up to 200 million rials ($725) for those who report illegal cryptocurrency mining centers, farms and homes. It says the rewards encourage people to help it find and penalize the unruly miners.
Mining virtual currency is legal in Iran and miners are allowed to operate under rules approved by the government in July 2019. As per law, mining cryptocurrencies without having an operational license from the Ministry of Industries is illegal.

The utility confiscates illegal miners' equipment and their electricity is cut. They also must pay for the damages they inflict on the national grid that often struggles to meet rising demand, especially in the hot summer months.
However, illegal farms have cropped up with increasing speed using subsidized electricity because they must pay much higher tariffs if they operate with a permit.
Businesses and informed observers blame cumbersome rules for obtaining licenses along with the high electricity tariffs for the growth in underground cryptomining and say power shortages are less due to the illegal mining of digital currency and more a function of mismanagement and ageing infrastructure and technology.
In April the Energy Ministry revised cryptomining rules as per which 16,574 rials is charged for one kilowatt-hour of electricity. The new rate is more than three times the previous 4,800 rials for one kilowatt-hour.
Electricity prices for cryptomining are set as per power export tariffs and based on daily currency rates at Nima — a currency platform where forex is traded among importers and exporters.
Currently 56 cryptomining farms are authorized to operate with a total consumption of 400 megawatts.
Iran was the single largest provider of energy subsidies across the globe in 2020. Based on data from the International Energy Agency, Iran paid $29.7 billion in energy subsidies last year to rank first globally, leaving behind China with $25.5 billion, India $23.7 billion and Saudi Arabia $10.9 billion.

Cryptocurrencies in Iran . . . . https://financialtribune.com/node/111145Click to copy the urlCopied . Republishing Guidelines