Economy August 27, 2021 19:23 0 Covid-19 Vaccine Imports Exceed 28 Million Doses . . . . . More than 28 million doses of Covid-19 vaccines have been imported to Iran, according to the technical deputy of the Islamic Republic of Iran Customs Administration.“The imported shipments include 22.35 million doses of Sinopharm vaccines from China 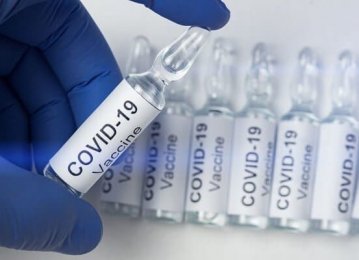 More than 28 million doses of Covid-19 vaccines have been imported to Iran, according to the technical deputy of the Islamic Republic of Iran Customs Administration.
“The imported shipments include 22.35 million doses of Sinopharm vaccines from China in 23 shipments, 2.91 million doses of AstraZeneca from Japan in three shipments, 1.45 million doses of COVAX from Italy in a single shipment, 1.04 million doses of Sputnik V from Russia in 11 shipments, 700,800 doses of COVAX from South Korea, 315,000 doses of AstraZeneca from Russia in a single shipment and 125,000 doses of Bharat [COVAXIN] from India in a single shipment. In total, imports stand at 28.89 million doses in the form of 41 shipments to date,” Mehrdad Jamal Orounaqi was also quoted as saying by IRIB News on August 26.
Nasser Riahi, vice chairman of Tehran Chamber of Commerce for Health Economics Commission, recently said preliminary talks are underway for importing 40 million doses of Pfizer and Johnson & Johnson's Janssen Covid-19 vaccine.
It is hoped that negotiations would be finalized in the near future, he added.
Asked whether the import of these vaccines will be carried out by the private sector, he stated that these vaccines will probably be imported through the COVAX mechanism, and the Foreign Exchange Board of Trustees of Health Ministry will probably be in charge of importing these vaccines.
Notably, the first batch of Covid-19 vaccines imported by the private sector arrived in Iran from Russia on July 28.
According to Riahi, the shipment included 320,000 doses of the AstraZeneca vaccine, which is the first batch of a larger order placed by the private sector.
He noted that many more shipments are to arrive in the coming days and weeks.
Cobel Darou, one of the biggest pharmaceutical companies in Iran, was the importer of these vaccines from the Russian drugmaker R-Pharm, ILNA reported.
Earlier this year, the private sector announced signing a deal to import six million doses of Covid-19 vaccines.
“The imports of these vaccines will be financed by business owners, manufacturers and executive managers of companies at market exchange rate for the free vaccination of their workers,” Masoud Khansari, the head of Tehran Chamber of Commerce, Industries, Mines and Agriculture said then.
“Notably, importers will supply the vaccine on a not-for-profit basis and with the license issued by the Health Ministry and the supervision of the National Coronavirus Headquarters,” he was quoted as saying by Fars News Agency.

Administrative hurdles are slowing down the import of Covid-19 vaccines into Iran, Khansari told the Persian economic daily Donya-e-Eqtesad.
Noting that several companies placed an order for the purchase of six million doses of Sputnik V and AstraZeneca vaccines and that all large and small companies, even those active in services, agreed to finance over 15,000 billion rials ($55 million) worth of vaccine imports, he said the pro forma invoice of these doses was received from seller companies and sent to the Health Ministry.
“It was vital to finalize the import procedure at a faster pace without bureaucratic barriers but unfortunately these bureaucratic complexities blew up the opportunity since sellers insisted on the Iranian government approving the purchases. For a month, the chamber was jostling with the Health Ministry to secure the approval letter. We talked almost with all high-ranking officials; all of them either those in the government or in the parliament promised to cooperate but the pro forma invoice was only valid for a week,” he said.
“We missed the opportunity to buy a million doses of vaccine due to a lack of collaboration. The world faced another wave of Covid-19 transmission in June and countries limited their exports. TCCIM tried to find another source. This time, importer companies tried to purchase three million doses of AstraZeneca from India on their own credit. But due to India’s worsening Covid crisis, the country banned exports. Credit documents regarding imports from India are still valid and hopefully the Asian country will lift the ban on imports soon.”
In the meantime, a well-known company managed to import a significant volume of AstraZeneca vaccines using the government’s subsidized foreign currency at the rate of 42,000 rials per US dollar and gave them to the Health Ministry.
“Sadly, Iran’s bureaucratic system is not at all ready for reacting efficiently in the face of emergencies. Somehow, one might say this much of stonewalling is by intent; there’s no reason to think vaccine imports by the private sector won’t endanger the interests of some people,” Khansari concluded.
The new government led by Ebrahim Raeisi has vowed to place public vaccination on top of its agenda and facilitate imports.