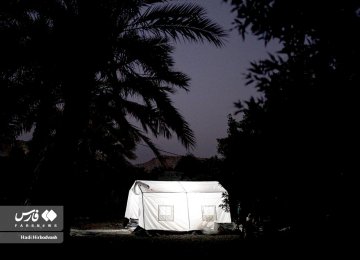 Insurance companies are looking into damage caused by the massive earthquake that struck southern Hormozgan Province off the Persian Gulf.
Two strong tremors, the largest a 6.4, shook Bandar Abbas killing at least one person and injuring at least 98 others, the Iran Emergency Medical Services Organization said on Sunday.
Iran’s Seismological Center said the first quake had a 6.4 magnitude and the second 6.3 — both about 15 kilometers below the surface.
The tremors were felt in the Arab states of UAE, Qatar, Bahrain, and Saudi Arabia all in the Persian Gulf. More than 50 aftershocks were registered
The natural disaster caused at least 7 trillion rials ($24.8 million) inlosses, Mehdi Dousti, the governor of Hormozgan Province, was quoted as saying by ISNA,
"About 3,000 homes were damaged," he said.
On Sunday, 222 emergency tents were set up to accommodate the victims. Aftershocks closed schools on Sunday and Monday.
Iranian Red Crescent Society officials said at least 5,000 families have been affected.
The government has said it will provide financial aid to the tune of 2.2 billion rials to the affected households. The Central Insurance company of Iran ordered insurance companies to urgently assess the losses and inform the regulator details of the daily payments.

In its capacity as regulator of the insurance industry, the CII recently established the National Disasters Insurance Fund to cover 30 million homes against natural disasters.
The fund is set to cover losses caused by natural disasters until March. As per a bill passed by parliament, homeowners pay half the premium and the government the other half for the home insurance policy.
Buying home insurance against natural disasters recently became mandatory in Iran and the premium is added to the electricity bills.
Iran has been hit by 125 natural disasters in 25 years, resulting in 73,000 deaths, 145,000 injuries and impacting 41 million lives. The calamities spread death and destruction far and wide and cost $20 billion, according to CII data.
An IMF report on "Macroeconomic Outcomes in Disaster-Prone Countries" published in October 2019 categorized Iran among the first quartile (0%-25%) of the annual probability distribution of natural disasters in non-disaster-prone countries.
Iran’s economic cost of natural disasters was equivalent to 0.27% on average and a maximum of 2.9% of the country’s GDP during 1998-2017.