Business And Markets November 07, 2021 23:36 0 Crackdown on Unlawful Cryptomining Continues . . . . . The crackdown on unauthorized cryptomining continues in Iran with 227 more devices confiscated in the past week.Iran Power Generation, Distribution and Transmission Company, Tavanir, said the equipment were seized from 14 illegal centers across the country mostly 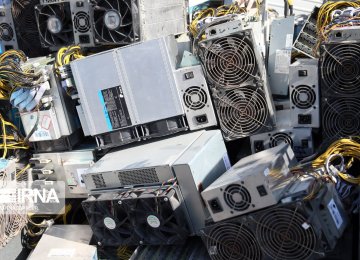 The crackdown on unauthorized cryptomining continues in Iran with 227 more devices confiscated in the past week.
Iran Power Generation, Distribution and Transmission Company, Tavanir, said the equipment were seized from 14 illegal centers across the country mostly in Tehran, East Azarbaijan, Isfahan and Khuzestan provinces, IBENA reported.
The illegal mining devices were found in households and were detected by Tavanir inspections, the utility said.
Mining virtual currency is legal in Iran and miners are allowed to operate under rules approved by the government in July 2019.
While cryptomining is accepted by the government as legal, illegal farms have cropped up with increasing speed as the prices of digital currencies surge. Underground cryptominers also use subsidized electricity because they must pay much higher tariffs if they operate with a permit.
Cryptominers have been blamed for the chronic power shortages in recent months that have fueled frustration across the board despite the fact that the share of legal miners in the total electricity consumption is meager.
As per law, Tavanir confiscates illegal miners' equipment and their electricity can be cut. As penalty, they must also pay for all the damages they inflict on the national grid.
The prosecutor-general’s office recently banned the release of seized hardware used by unauthorized cryptominers until laws are passed by the Majlis on how to deal with the illegal miners.
With the latest confiscations, Tavanir has shut 5,756 illegal mining farms so far seizing 221,390 pieces of hardware.
Currently 30 cryptomining farms are authorized to operate by the Industries Ministry. They collectively consume 400 megawatts. Unlicensed miners are still using almost 2,000 MW, according to Tavanir data.
In April the Energy Ministry revised regulations for cryptomining as per which 16,574 rials is charged for one kilowatt-hour. Tariffs are cut by half when household consumption is low and the grid is not under pressure as is the case in summer.
Rates double during restrictions like when power plants do not receive enough gas as feedstock or parts of the national grid undergo routine maintenance.

Tavanir has warned about the possibility of power cuts in winter due to the consumption pressure on the national grid apparently worsened by illegal cryptomining.
"Rising demand for electricity by unauthorized cryptominers is likely to cause blackouts this winter when gas consumption too is at peak as happened in summer."
The utility says the current penalties for illegal cryptominers is not preventive enough and has urged the judiciary to announce stricter measures to discourage the unruly miners.

Cryptocurrencies in Iran . . . . https://financialtribune.com/node/111055Click to copy the urlCopied . Republishing Guidelines