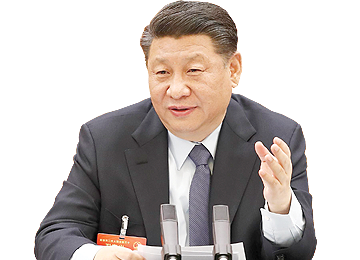 Chinese President Xi Jinping said the economy can double in size by 2035 and the country can reach high-income status in the next five years, as the Communist Party outlined ambitious plans for the nation’s future.
“It is entirely possible to reach the high-income country status by current standards by the end of the 14th Five-Year Plan, and to double the total economic output or per capita income by 2035,” Xi said in a speech to the party’s Central Committee, according to state media Xinhua, Bloomberg reported.
The Chinese Communist Party’s top decision-makers released a broad framework for a five-year economic plan and 15-year vision last week, focusing on self-reliance in technology, boosting domestic consumption and pursuing quality growth over speed.
“While the plan didn’t specify an explicit growth target, Xi’s ambition to double gross domestic product by 2035 would mean an annual growth rate of nearly 4.7%,” said Hong Hao, chief strategist for Bocom International in Hong Kong. “This is ambitious, as the Chinese economy is already of significant size.”
China has the world’s second-largest economy, estimated at $14.3 trillion in current dollars by the World Bank. The Washington-based lender categorizes China as an upper middle-income economy with a per-capita income of $10,410. A high-income country is one with gross national income per capita of $12,375 or more.
Xi’s latest target is similar to the current goal to double the country’s GDP and income from the 2010 levels by 2020, as well as building a ‘moderately prosperous society’ by the end of this year.
“China will formally announce victory on that target after conducting a systematic assessment in the first half of next year,” Xi said.
The new goals may be more difficult to achieve in a global economy that could reel from the coronavirus pandemic for years to come and a geopolitical environment that’s become more hostile to China’s ambitions. The US has pressured China on trade and technology, adding to Beijing’s urgency to become more self-sufficient in key areas.
Economists surveyed by Bloomberg see the economy expanding 2.1% this year as a result of the coronavirus pandemic, accelerating to 8% in 2021. The statement didn’t specify on which year the target of doubling the size of the economy would be based.

Xing Zhaopeng, an economist at Australia & New Zealand Banking Group, said China’s goals were “conservative”, and implied an average growth rate of 4.5% from 2022 to 2035. He sees the economy expanding 9.2% next year.
“This means China’s leadership will emphasize more on the quality and structure than quantity” of growth, he said. “My estimate shows that China can double the output in 12 years.”
Xi cited instability and uncertainty in the global environment in the coming years, with many risks that could affect the domestic economy.
The Covid-19 pandemic has had far-reaching effects and the world economy may continue to suffer, the state media agency cited him as saying.
Xinhua also published more detailed proposals from the five-year plan, including: Promoting yuan’s internationalization in a “steady and prudent” manner, supporting Beijing, Shanghai and the Greater Bay area of Guangdong, Hong Kong and Macau as international technology innovation centers, boosting “strategic technologies”.
The plan called to mobilize all the country’s resources to make breakthroughs in key technology development from artificial intelligence to quantum computing and semiconductor manufacturing, strengthening domestic oil and gas production while also promoting clean energy.